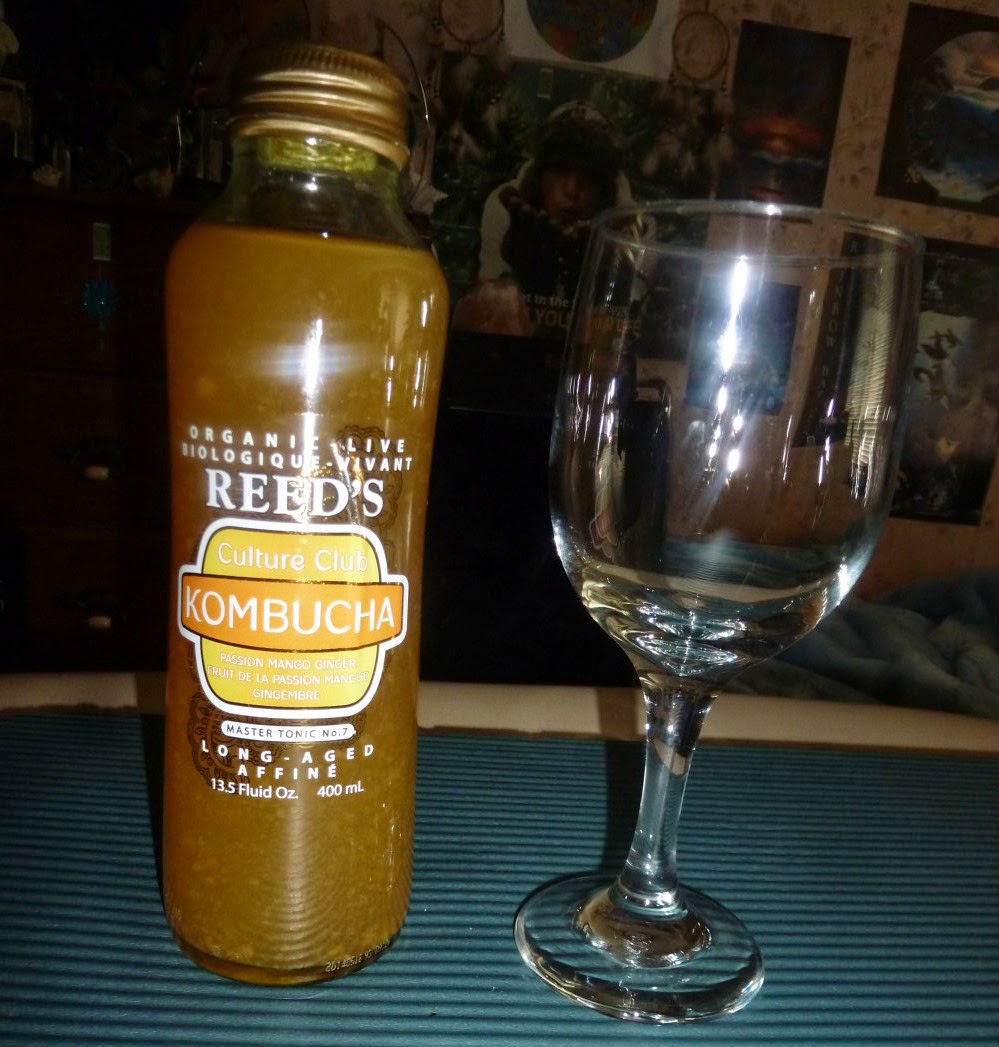 j
As part of my new years resolution of adding more probiotics to my diet, along with cultured veggies I have added kombucha daily as well. I became aware of this healthy drink in 2013, as a good friend of mine would make some for me. I have found yet another delicious Kombucha drink at my local co-op! Reed's passion, mango, ginger Kombucha. 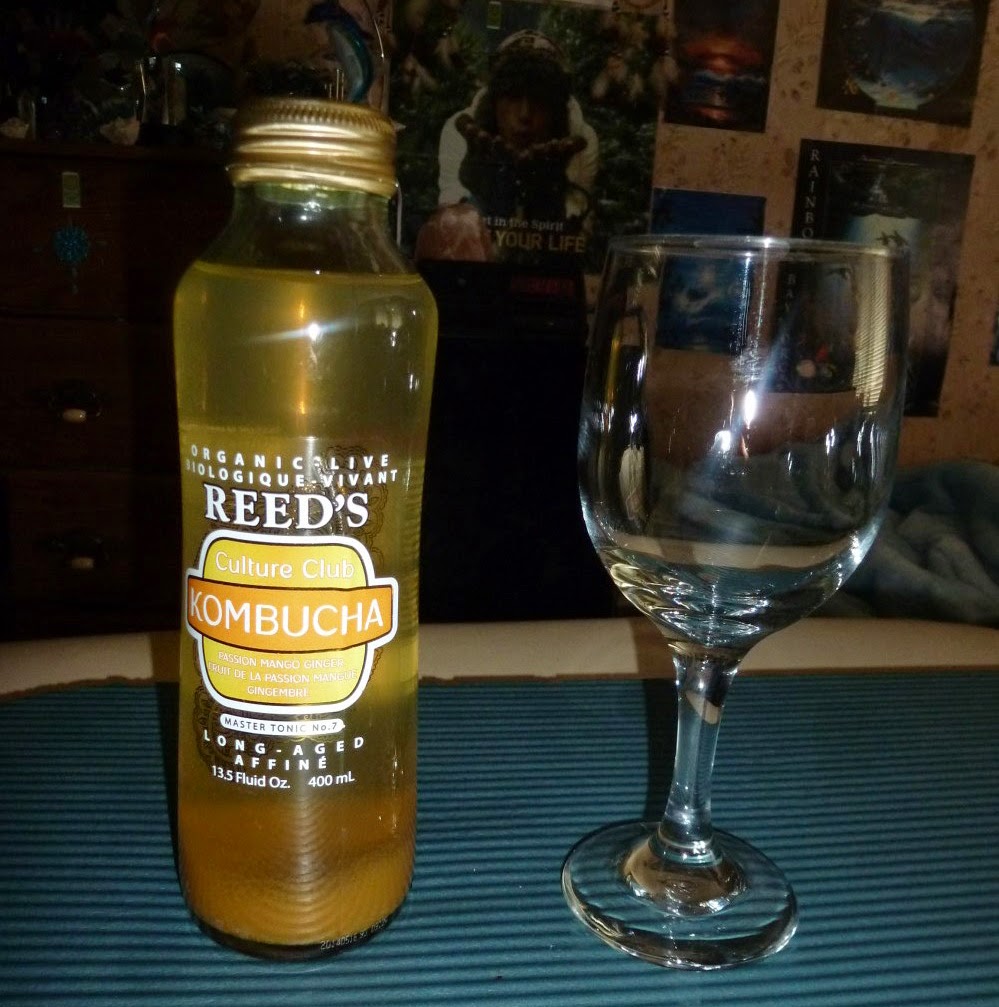 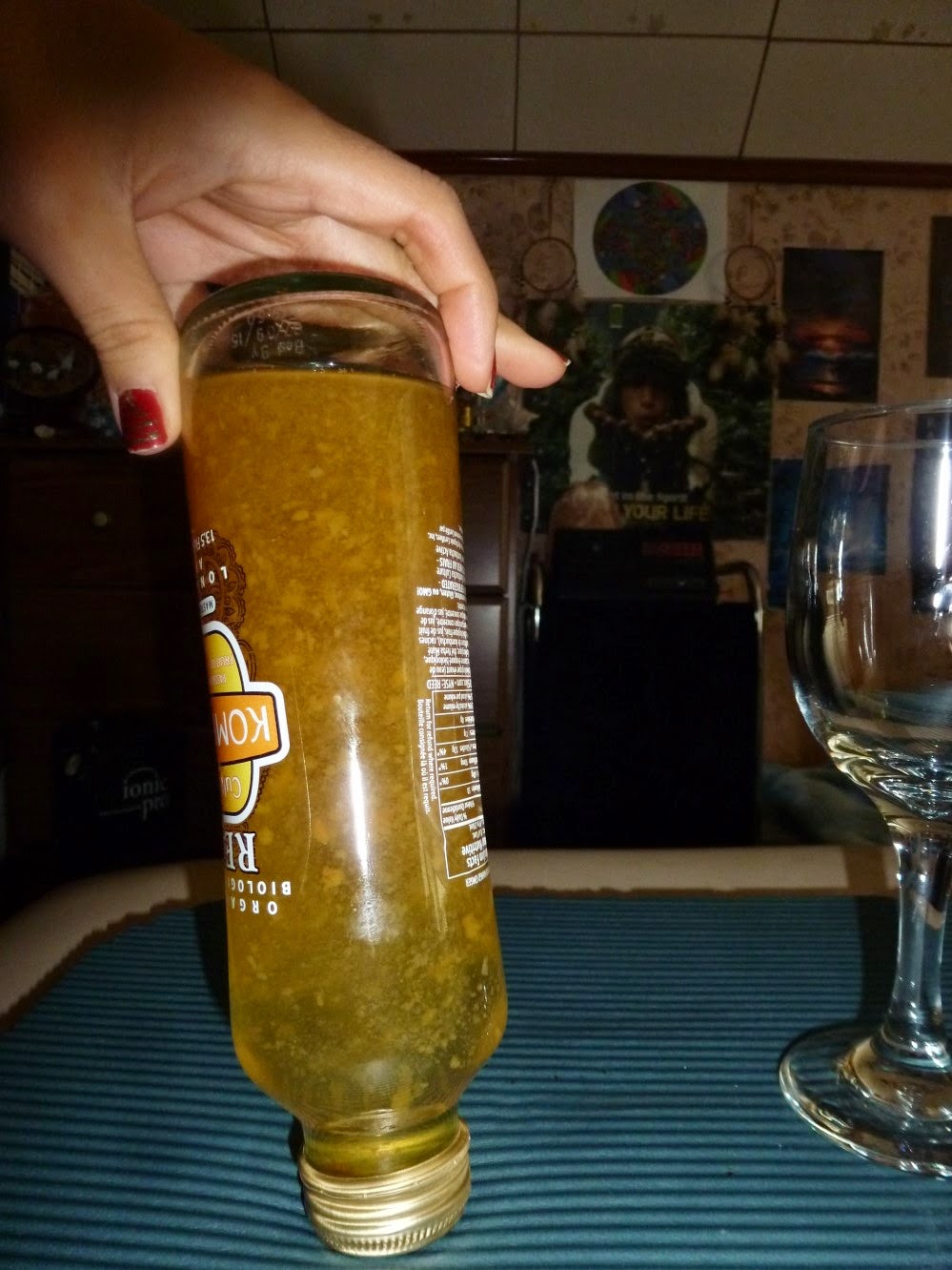 So I gently turn it upside down to mix it up...never shake it! Kombucha naturally carbonates so you don't want to open a bottle and experience an exploding fountain of wasted goodness! 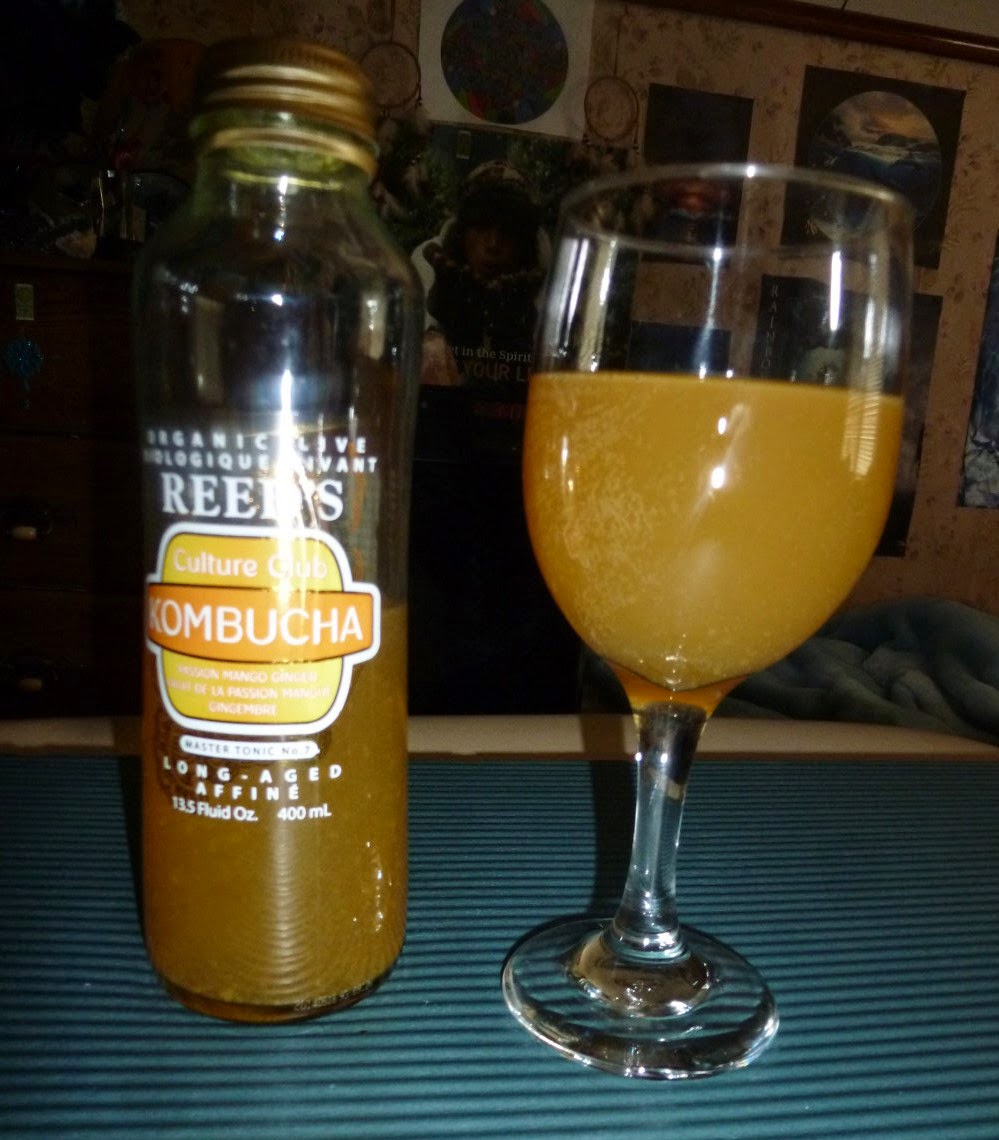 The subtle bubbles are delightful ^_^ I really like this kind!

Known as the “Immortal Health Elixir” by the Chinese and originating in the Far East around 2,000 years ago, kombucha is a beverage with tremendous health benefits.

Kombucha is a fermented beverage of black tea and cane sugar that is used as a functional food.  Kombucha contains b-vitamins, enzymes, probiotics and a high concentration of acid (acetic, gluconic, and lactic), which have the following effects:
The sugar-tea solution is fermented by bacteria and yeast and is commonly known as a “SCOBY” (symbiotic colony of bacteria and yeast).
You can make kombucha yourself at home or buy it for $3-5 a bottle at most health food stores and some coffee shops. An article published in the journal Food Microbiology has established that the following probiotics make up this health elixir.

Ultimately, this cocktail of good bacteria interact together in a unique way to produce some unbelievable health benefits for those who drink it.

In the newest research published in the Journal of Medicinal Food 2014, researchers from the University of Latvia say the following about the health benefits of kombucha:

It is shown that [kombucha] can efficiently act in health preservation and recovery due to four main properties: detoxification, anti-oxidation, energizing potencies, and promotion of boosting immunity.
We agree! In fact, according to research there are 5 main health benefits of kombucha.

#1 Detoxification – The detoxifying capacity of kombucha is immense. A perfect example has been observed in its ability to counteract liver cell toxicity.
In one study, the liver cells being evaluated were protected from oxidative injury and actually maintained their normal physiology, in spite of being exposed to the toxin! According to researchers, this was “probably due to its antioxidant activity and could be beneficial against liver diseases, where oxidative stress is known to play a crucial role.”

#2 Digestion – Naturally the antioxidant prowess of this ancient tea counteracts free radicals that create mayhem in the digestive system. However, the greatest reason kombucha supports digestion is because of its high levels of beneficial acid, probiotics and enzymes.

Extensive work has even been conducted to test kombucha’s ability to prevent and heal leaky gut and stomach ulcers. No surprise to us, it was proven to be as effective as drugs like Prilosec, which are commonly prescribed for heartburn, GERD, and ulcers.

#3 Energy – Kombucha’s ability to invigorate people has been credited to the formation of iron that is released from the black tea during the fermentation process.  It also contains some caffeine and b-vitamins, which can energize the body.

Through a special process known as chelation, the iron released helps to boost blood hemoglobin, improving oxygen supply to tissues and stimulating the energy producing process at the cellular level. In other words, by helping the body create more energy (ATP), the ancient tea can help those who regularly drink stay energized for extended periods of time.

#4 Immune Health – The overall effect that kombucha has to modulate the immune system is best seen in its ability to control free radicals through unbelievable antioxidant measures.

Clinically proven to decrease oxidative stress and related immuno-suppression, a powerful antioxidant known as D-saccharic acid-1, 4-lactone (DSL) has been discovered during the kombucha fermentation process that is not found in black tea alone. Also, we know the probiotics found in kombucha support the immune system.

Scientists suspect that DSL and the Vitamin C present in kombucha are its’ main secrets in protecting against cell damage, inflammatory diseases, tumors and overall depression of the immune system.

#5 Joint Care – Kombucha can help heal, repair and prevent joint damage in a number of ways. Kombucha is loaded with glucosamines, which increase synovial hyaluronic acid production. This supports the preservation of collagen and prevents arthritic pain. In the same way it supports joint collagen it can also support collagen of the entire body and reduce the appearance of wrinkles.


#6 Cancer Prevention – Kombucha has also been proven beneficial for cancer prevention and recovery.  A study published in Cancer Letters found that by consuming glucaric acid found in kombucha reduced the risk of cancer in humans.

#7 Weight Loss – Data from a study in 2005 showed evidence that kombucha can improve metabolism and limit fat accumulation.  Though we’ll need to see more studies before we can confirm these results, it makes sense that kombucha supports weight loss since it’s high in acetic acid and polyphenols which have in other studies been proven to increase weight loss.

Most people experience great benefits drinking kombucha and have no negative side effects. However there are possible interactions and side effect symptoms to be aware, mostly in populations that already have weakened immune systems and digestive problems:

Use caution if you have a weakened immune system-
People who have compromised immunity due to certain viruses like HIV/AIDS will need to be careful about consuming kombucha, since there is always a possibility that the yeast can grow harmful fungus and bacteria that can possibly cause illness. This is especially true of homemade kombucha where contamination is more likely to happen if it’s brewed in an unsanitary environment.

Women who are pregnant or nursing-
While kombucha hasn’t been studied much at all in pregnant women, there is always concern that pregnant women should not consume alcohol or caffeine, both of which are present in kombucha in small amounts. Before more formal research is conducted showing that it’s completely safe, pregnant women are advised to air on the safe side and avoid kombucha.

Those who cannot tolerate even low levels of sugar, caffeine or alcohol-
Kombucha is brewed using black sea and sugar, which when fermented turn into alcohol is very small amounts (only about 1% of kombucha is believed to be alcohol). For people with existing diabetes, kombucha likely won’t cause much of a problem considering it is very low in sugar (about 2 grams per 8 oz.) but it’s worth being careful about and monitoring blood sugar levels and related symptoms. For those with digestive problems like IBS or anxiety disorders, the low level of caffeine in kombucha is also something to be conscious of, since caffeine can sometimes aggravate these conditions.
Posted by AnitaStayHealthy at 1:00 AM